You may be looking at employee engagement all wrong 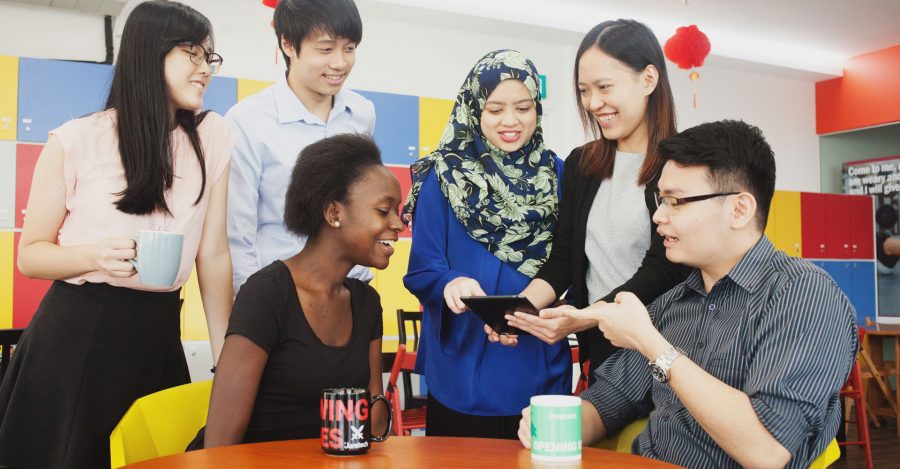 Image: Jurisians at work together.

In his Stanford University Commencement address on 12 June, 2005, Steve Jobs said, ‘Your work is going to fill a large part of your life, and the only way to be truly satisfied is to do what you believe is great work. And the only way to do great work is to love what you do.’

It was an apt statement considering that the audience were graduates. But the fact remains even for those in the workforce for a while now. Because a huge chunk of our lives will be spent working, it is imperative then, for companies to instill a healthy culture of engaged workers, regardless of industry.

But what is a company culture, and why is employee engagement so important, anyway?

Organisational culture and its importance

Graph: Google Ngram Viewer for ‘corporate culture’ and its variants.

A search on Google Ngram Viewer for ‘corporate culture’ and its variants showed that the phrase first popped up in the early 1900s as the Second Industrial Revolution was in full swing. During this period, industries that arise such as banking, insurance, petroleum, rail, retail, and telegraphy, grew exponentially and more contemporary jobs were created. It took another six decades, but by the 1960s, the awareness of culture, not just in businesses but in other organisations such as universities, began to build. This was also the time when we began to take people’s well-being more seriously – to not treat workers as just cogs in the machine, but unique individuals that contribute to the growth of any organisation.

Contemporary company culture is described as a character or personality of a company. It includes general behaviours and beliefs, values instilled company-wide, management practices, work environment, and employee communications and relations. While company culture can be influenced from the top by national cultures and traditions, or from the bottom by employees themselves, it should be purposefully nurtured by the company itself. A culture of an organisation is simply too important to let it form organically.

Now, cultural fit can cut both ways. When there is a fit, workers are more likely to engage with the businesses of their company, and therefore be more productive. However, whenever there is a cultural misfit, through no fault of the company or the employee, it could take the pleasure out of work. For instance, a person may prefer working independently but works for a company that encourages constant collaboration. Therefore, it goes without saying that a company culture is important to employees whether they realise it or not.

But this doesn’t necessarily mean a company should only hire employees that fit its existing culture, as we will discuss later.

Employee engagement and its importance

We all intuitively know that engaged employees are ones that display a great deal of energy, enthusiasm, and motivation, which, in turn, convert into higher levels of creativity, performance, and productivity. Besides higher revenues and profits for companies, more engaged employees also mean increased satisfaction levels and retention rates. On the flip side, employees that are generally considered to exhibit low levels of engagement, tend to experience burnout, leading to lower output and higher turnover rates.

Remember the Steve Jobs quote earlier? If we’re going to be spending a long time working, the only way to be truly satisfied is to do great work that you love and believe in.

Engagement is a reflection of personality and culture

In recent years, it was believed that employee engagement depends mainly on extrinsic factors such as the nature of the job itself, the management, or the culture of the company. However, an HBR article offered a contrarian view, though not necessarily supporting that view, where engagement and motivation could also be due to intrinsic factors such as personality. Traditionally, this was a common view by companies, way before employee engagement was even a subject of discussion. This led to companies usually preferring to hire already engaged workers – generally positive go-getters who display a consistent level of dedication, regardless of situation.

The article cited a meta-analysis of 114 independent surveys of almost 45,000 employees in various countries. The findings of the analysis were notable, in that almost 50% of the engagement variables could be attributed to employees’ personalities, specifically, positive affect, proactivity, conscientiousness, and extraversion. This means that those that are more enthusiastic, optimistic, and positive, tend to display more ‘engagement’.

Companies looking for a quick fix to increase employee engagement, might be quick to reaffirm their notion that hiring generally positive people is the right way to go. However, this comes with its own set of drawbacks.

Cognitive diversity is as important as cultural diversity

The same piece also pointed out four caveats to think of, if companies only pick so-called ‘engageable’ employees.

Firstly, remember that personality only accounts for half of the engagement drivers. The other half is still based on extrinsic factors such as those mentioned earlier. While an employee’s grievances might be biased by their own personality, any problems faced could also be experienced by everyone, company-wide. To ignore these individuals, will not solve any of the company-wide problems.

Secondly, the issues raised may not be unfounded. And the employees’ raising said issues are indeed engaging with the company, just not necessarily in a way that the company agrees with. And naturally critical employees don’t necessarily mean they’re not resilient. If the emphasis on positivity traits like optimism and resilience is placed during the hiring process, a company may risk making cultural or operational issues harder to spot, when using employee surveys as signals. An analogue of this would be, a restaurant, instead of looking to raise the quality of the food and service to improve ratings, went on to only accept customers with lower expectations and standards.

Thirdly, speaking of critical employees, many innovators and pioneers we revere tend to be those who are not happy with how things are, and are looking to challenge and change the status quo, not for the sake of it, but to improve things. Screening these people out early on will definitely boost employee engagement in the short term, but innovation may suffer in the long term. People who are naturally content with how things are, are also naturally not looking to change things up.

Lastly, all this is to reinforce the fact that diversity in any company is crucial. When building a highly effective team, one mustn’t look for like-minded people who merely compliment each other, but diverse people who complement each other as well. We’re not just talking about cultural diversity here, but cognitive diversity, too. Cognitive diversity is when there is a variety in thinking, feeling, and acting – all of which will only lead to many distinct ideas and dissimilar eyes to spot potential pitfalls. That way, a monocultural society without the luxury of cultural diversity, could still benefit from having diverse ideas.

Don’t get me wrong, both sides of the equation are, well, equally important. We’ve established at length the need for critical employees, as long as their goals are aligned. However, naturally optimistic, positive, and proactive employees will also guide the team to be resilient through adversity, look for new opportunities, and keep morale high. We need to accept that this dynamic is necessary for a highly effective team.

Perhaps, we’ve been looking at employee engagement all wrong.

Often, when a company is looking to increase employee engagement, they may not even fully understand what engagement actually means in this context. Not understanding this may lead to superficial actions to promote ‘engagement’ in the form of getting employees to join company events unnecessarily, or forcing everyone to be more agreeable. Perhaps, employees offering dissenting opinions are an act of engagement, just not in the form you agree with. Perhaps, disengaged employees are a sign of unaddressed issues, and that disengagement is an act of engagement too, albeit an indirect one.

Of course, hiring the right people is still important, to make sure their values and talents and purpose and goals are aligned. But just like ‘engagement’, the definition of ‘talent’ has to be expanded to cover a more culturally and cognitively diverse group of people.

We talked about how we can’t directly change intrinsic factors besides hiring (or not hiring) certain people. However, extrinsic factors remain equally as important and can be addressed directly by companies looking to improve employee engagement. In fact, to naturally promote healthy engagement, the company culture can be molded to encourage constructive feedback, to have inclusive company activities, to form an ethics committee to ensure all endeavours are conducted ethically and in accordance with the law, etc. The list goes on. Rather than hiring people that fit the existing company culture, the company culture should constantly evolve and update itself, to fit its people.

The Steve Jobs quote at the beginning of this piece about loving what you do, is continued with, ‘If you haven’t found it yet, keep looking. Don’t settle. As with all matters of the heart, you’ll know when you find it. And, like any great relationship, it just gets better and better as the years roll on. So keep looking until you find it. Don’t settle.’

While his target audience were graduates, the same sentiment applies to companies too. Some companies, after having found something that worked many years ago, just stuck to the old ways of doing things. To have a growth mindset is to have an open mind to continuously improve the culture and processes, based on data and results. Don’t settle.

Our 200+ Jurisians consist of not just technical engineers and data scientists, but business domain and subject-matter experts as well. This ensures that our solutions are addressing needs in a holistic manner. We employ people from various countries and fields, including those without technical backgrounds but have expertise in areas valuable to the business.

One of the ways we nurture our culture is by practising our GECO core values, Growing Heroes, Making Excellence Happen, Customer First, and Opening Up. Besides organising inclusive activities frequently, we also keep Jurisians on the same page by having monthly town hall meetings and by updating them through our Footsteps app.

About the Author: Reuben Thum

Reuben Thum is an alumnus of JurisTech who was part of the Marketing and Communications team. He covered everything including in-depth analyses of Juris solution features, explanations of esoteric concepts such as Agile software development and design thinking, plus creative copies like quips and poems. Formerly, he was a journalist covering the consumer technology space, as well as a technical support engineer for Microsoft products.