Skill It To Kill It: Skills You Need As A Software Engineer At JurisTech 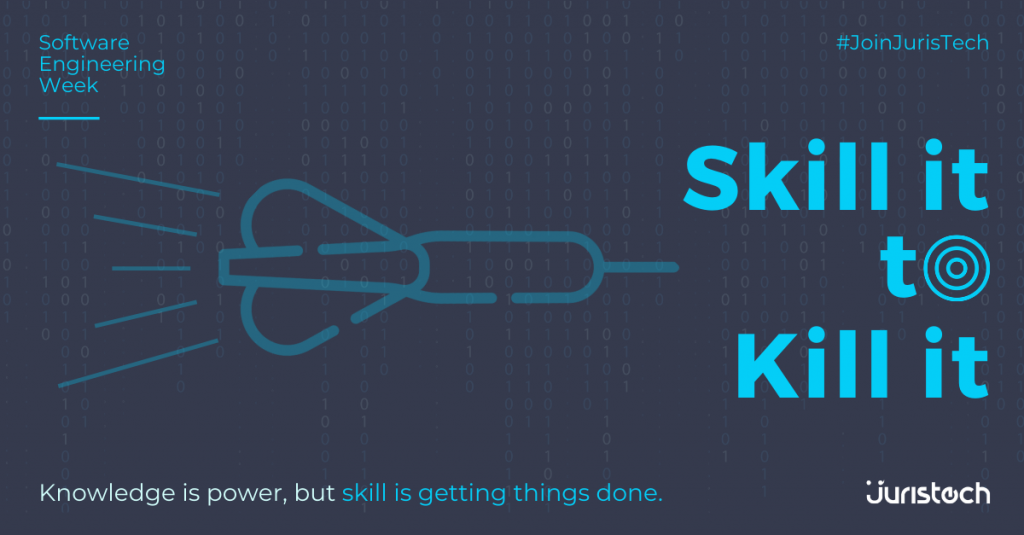 Software engineers carry a significant role in the software development industry and can be highly sought after if they hold the necessary skills. In such a dynamic industry, engineers need to be able to develop and practise both their soft and technical skills to ensure that their careers flourish.

Software companies often focus too deep into evaluating a candidate’s technical abilities, they overlook other equally important and crucial qualities such as a candidate’s ability to solve complex problems, think creatively, and their work compatibility with teams. These qualities are what sets the bar high among other competing candidates. Technical expertise can be easily acquired through hard work in a professional setting. However, to instill soft skills that are essential to interacting efficiently and harmoniously with colleagues and clients, is the real challenge.

At JurisTech, we embrace such growth development in instilling both skill sets into our engineers. The effort into acquiring talent, let alone, growing our people to their full potential, is just as much a reflection to the growth and success of our company.

Let’s look a little closer at some of the skills you can gain on your way into becoming an exceptional full-stack engineer.

Understanding the fundamentals of databases and how they function is crucial in any developer’s work. The ability to manipulate, organise, and maintain the security of data in a way that would be more convenient to use in a particular project should be a basic knowledge all programmers should obtain.

Many can confuse algorithms for being connected directly to databases, but in actuality, they are methods of collecting and organising data in such a way that can perform operations in an effective manner. They are sets of instructions that should be properly executed in order to reach a required output. It’s a crucial skill for every programmer to master, to be able to access and manipulate data efficiently.

Source control also known as version control is a practice every programmer should be proficient in, to be able to track and manage their work on different branches of the same codebase. It allows for a developer and their peer’s code to be merged into a single project after the completion of each individual’s work. It’s not only important for maintaining a single source of truth for development teams, but also aids to facilitate collaboration in their work.

To ensure the code operates as expected in different scenarios, developers go through a testing phase to cross-check whether the actual results match the expected results. There are several different stages such as unit testing, integration testing, system testing, and user acceptance testing. Developers should be familiar with some testing knowledge to point out defects and errors that were made during the development phases.

Communication is a key factor when it comes to understanding the workflow of a project in teams. The ability to communicate in a manner that addresses certain problems faced during a project, provides insight to other team members that may face the same problem. This not only aids working head-to-head in overcoming problems, but in turn, mitigates the chances of a project going wrong.

Engineers and software developers are in actuality, problem-solvers. One of the many tools that is deemed most important is the spark of their own creativity. Problem-solving is a mechanism for identifying, tracing, and taking courses of action to troubleshoot your code. It is the ability to take your code apart to identify the root problem, find a solution, and put it all back together to finally be able to run your code. Now isn’t that just a call for victory?

So we all know how curiosity killed the cat, but should it also kill a programmer? It’s quite the opposite, really. Curiosity should only be piquing interest in every programmer. Being curious about why something isn’t working the way you expect it to in a project is important. Being curious instead of being judgemental and critical can mean the difference between the success and failure of a project.

Adaptability is a skill that should be second nature to all programmers. The ability for a programmer to embrace openness to learning new skills, taking on extra responsibilities, and even relocating is one of the most important aspects of adaptability. It can be very challenging for many programmers to go out of their way to react positively to comments, criticism, and even be placed in uncomfortable situations. As such, to many software companies, adaptability is a highly regarded and recognised quality to possess.

Timely delivery is an important aspect of software development. In learning how to follow times allocated to delivering specific tasks, it results in becoming more productive and efficient. Most projects are communal within a workplace, hence programmers would work hand in hand to deliver a product to a client. In that sense, time management would not only affect your performance, but also impact operational procedures and accomplishments of your peers. Therefore, it’s important to comprehend how time can carry an impact not only on the efficiency of work productivity but also to the quality of your project.

In essence, software engineering is a field that will be here for a long time to come. While it can be straining at times, it is still very much intellectually stimulating as you constantly feel the thrill in drilling down every project that questions your ability to deliver. There lies no greater satisfaction than the ability to being good at something. Just when you feel like there’s nothing more you can do, JurisTech will be right there standing by you.

About the Author: Abdullah Al Hindi

Abdullah is a Marketing Specialist at JurisTechnologies. He is an avid writer in the fintech and banking industry, and shows great interest in learning about the latest market trends.